This report summarizes the progress of enforcement case resolution in the first quarter of 2021. It also summarizes actions undertaken by the BCDC staff since the last Committee meeting held on March 24, 2021.

During the first quarter, staff closed 60 cases, opened 36 cases, and issued 2 after-the-fact permits.  At the Committee’s recommendation the Commission issued one cease and desist order to resolve a violation involving unauthorized fill in East Lagoon in White Slough in the City of Vallejo in Solano County.

In addition, staff settled three cases the first with Lind Tug and Barge Inc for $132,279 for unauthorized oyster shell mining, the second with Chevron for $2,000 for deviations from the BCDC approved dredging operation plan, and the third with Lind Marine for $1,000 for disposing of dredged material at a location other than the approved site with consideration given that the site where the dredged material was disposed allows for material that is less clean than the material that was disposed.  Staff also received $1,000 in standardized fines from Landry’s Inc.  The total balance of the Bay Clean Up and Abatement fund, as of March 31, 2021, was $659,045.46.

Caseload is the sum of all cases, including active cases, pending cases, and old cases.

Active cases are the cases actively being pursued.

Pending casesare cases within the case management process that have not yet reached the “resolution” milestone. These milestones are defined to include assignment, investigation, negotiation. Cases are pending for various reasons, including but not limited to pending permit applications, pending monitoring reports, pending site remediation, and pending enforcement cases/permits with other state and local government agencies, etc.

Old cases are all cases opened in 2016 or earlier, before the Enforcement Committee began regularly meeting and hearing cases, and that have been previously defined as the
“backlog”. The Oldest cases are a subset of old cases and this term is used to describe cases opened in 2000 or before.
Closed cases are cases that have been resolved. Cases are resolved for various reasons, including, but not limited to, no violation being found, BCDC reaching a settlement with the violator, orders being issued, or a judgment being rendered after litigation. 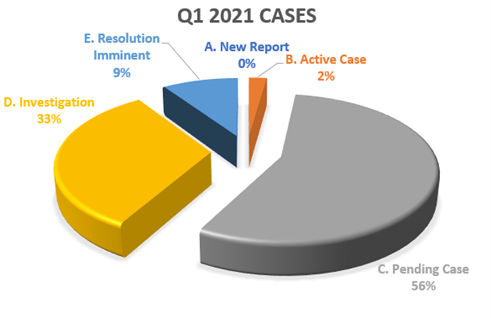